Torremolinos was one of the first places malagaminibus.com went to when they first started 27 years ago.
The most famous street in Torremolinos is Calle San Miguel, a street named after the family Miguel who brewed beer (San Miguel) on their family farm nearby.
The street is full of shops, restaurants and bars and at the end of Calle San Miguel you will find a church dating back to the 1800s called ‘Iglesia de San Miguel’. 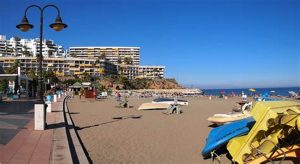 Malaga airport is only a 10 minutes transfer in the minibus which makes it a popular destination for tourists.
There are many squares in the town centre. The most notable being Plaza de la Nogalera and Plaza de Andalucía to sit and have a drink.
The name Torremolinos comes from the 16th century windmill at the end of Calle San Miguel known as Torre del los Molinos.
Torremolinos in Malaga was originally a fishing village dating back to the 1920s.

This resort has over seven kilometres of beach to explore so you may need malagaminibus.com to transport you from one end by Parador golf course to the other end next to Benalmadena marina.
Playa de Bajondillo beach is the lively part of Torremolinos surrounded by hotels restaurants and Chringuitos (beach bars). 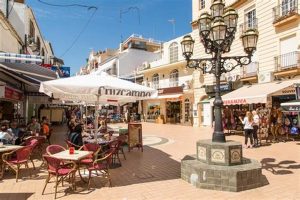 The Costa del Sol has been a tourist attraction for many years but Torremolinos was the first place to see transfers from Malaga airport back in the 1950s.
The most famous hotel in Torremolinos is the 5 star Pez Espada which has seen many superstars over the years. The likes of Frank Sinatra who stayed there whilst making the film Von Ryan`s Express in El Chorro in 1964. Dirk Bogarde and John Mills when filming in Alhaurin “The Singer not the Song in 1961. Anthony Quinn and George Segal visited when making “Lost command” in 1966. The film “Fathom” filmed in Almeria in 1967 see Raquel Walsh use the hotel as her base.

The best night life is in Benalmadena which joins Torremolinos. It is plentiful with 24 Hour Square being the most visited by the younger generation. With 10 night clubs with top DJs and bands. Transfers from Malaga airport take about 15 minutes.
La Carihuela is for the diners with the best fish restaurants on the Costa del Sol. It is an old fishing village where you can still see the fisherman in the early hours fishing at sea before dawn.