A review from guests at H10 puerto Banus

The Hotel H10 Andalucian Plaza Puerto Banus is a 4 star hotel located just off the main road that travels through the middle of the resort. It is an adults only hotel with a beautiful rooms, big swimming pool and large restaurant. You can book a room on line at www.h10hotels.com or telephone direct 0034 952812000. 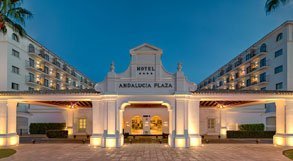 I have posted the clients surveys at the bottom of this page that have agreed for us to use their information.

Natalie Wilson completed a questionnaire for malagaminibus.com. Her party stayed at Hotel H10 Andalucian Plaza for 3 nights with a group of nine friends on 29-10-18. She rated the survey with seven 5s and one question not applicable (pool suitable for kids) as it’s an adult only resort out of the eight questions asked. She noted that La Sala was her favourite restaurant and Joys in the port her best bar. Natalie and friends used Jet2 airlines to reach Malaga Airport where they were met by malagaminibus.com driver Kevin who transferred them to the hotel.
John and Michael owners of malagaminibus.com wish to thank Natalie for completing our survey and hope to see her in the future. 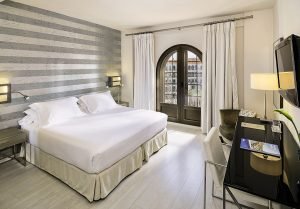 They were transferred from Malaga Airport to the hotel and return to the airport for a total price of 220 euro for nine persons.

He was staying at Hotel H10 Andalucian Plaza Puerto Banus on the  26-08-18. His comments reported six 5s and two 4s out of the eight questions asked. The party voted that their best restaurant was Arte Cafe and favourite bar Casi Casi . There were 5 persons on arrival at Malaga Airport and 9 persons on return and malagaminibus.com . They were charged 180 euro in total. Martin flew to Malaga with Ryanair and reports that it is his favourite airline.
John and Michael owners of malagaminibus.com wish to thank Martin for completing our survey and hope to see him and his friends in the future. 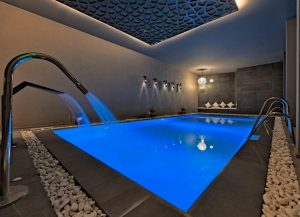 Debbie Whihny transferred with malagaminibus.com on the   17-09-18 in a group of five persons, staying at the Hotel H10 Andalucian Plaza, Puerto Banus for three nights and completed a survey with the following results.

Debbie voted out of the eight questions six as a 4 and two as a 3. She reported Nikki Beach as her favourite restaurant and Joys as her best bar. She travelled to Malaga Airport with Jet2 from Leeds and voted Jet2 as her airline of choice. She said a rent a car was not needed as beach was only a five minute walk. She commented that she would book again but did not comment on disabled question. I can advise you that the hotel is suitable for people with disabilities.

John and Michael from minibusnetrporttransfer.com thank Debbie for her comments and hope to see her again. You can transfer with malagaminibus.com from Malaga Airport to the hotel and return to airport for 155 euros for 5 persons in total and you can pay on arrival.